In July, Kathleen, Madeline, and I took a road trip to visit Robert, Giedre, Ava, Grace, and Conor in the Denver area. We spent two weekends with them and, in between, we headed off into Colorado for some sightseeing and photography. Our first main stop was to Crested Butte high in the mountains where the wildflowers were in bloom. In fact, they were having their annual wildflower festival while we were there. As I was looking at the map in planning the trip, I saw the Great Sand Dunes National Park more or less on the way back, and figured if it’s a national park, there must be something there, so we booked one night at Almarosa, the closest town.

Wow, was it worth it! After dropping bags at a motel, we headed to the dunes after lunch. You’re driving through a valley with mountains around it, and against the base of the mountains to the northeast are these dunes. They are the largest dunes in North America!

We stopped at the Visitor Center and talked to a ranger. It turns out that to get good pictures with an interplay of shadows and light in July, you have to hike way back into the dunes, to High Dune or beyond. In spring and fall, you can do it from the base. He also said that it was 120° up there right at the moment plus a rain storm was coming but those pass through in an hour or two.

The three of us drove to the parking lot near the dunes. Madeline and I walked barefoot through the wide but very shallow (like 1″-2″ deep) and started walking toward the dunes to just go a little way. The sand after the stream was hot, really hot. Madeline seemed to handle it well but she claimed that I squealed like a little girl. In any case, we didn’t go far; instead we scampered back to the stream and Kathleen. 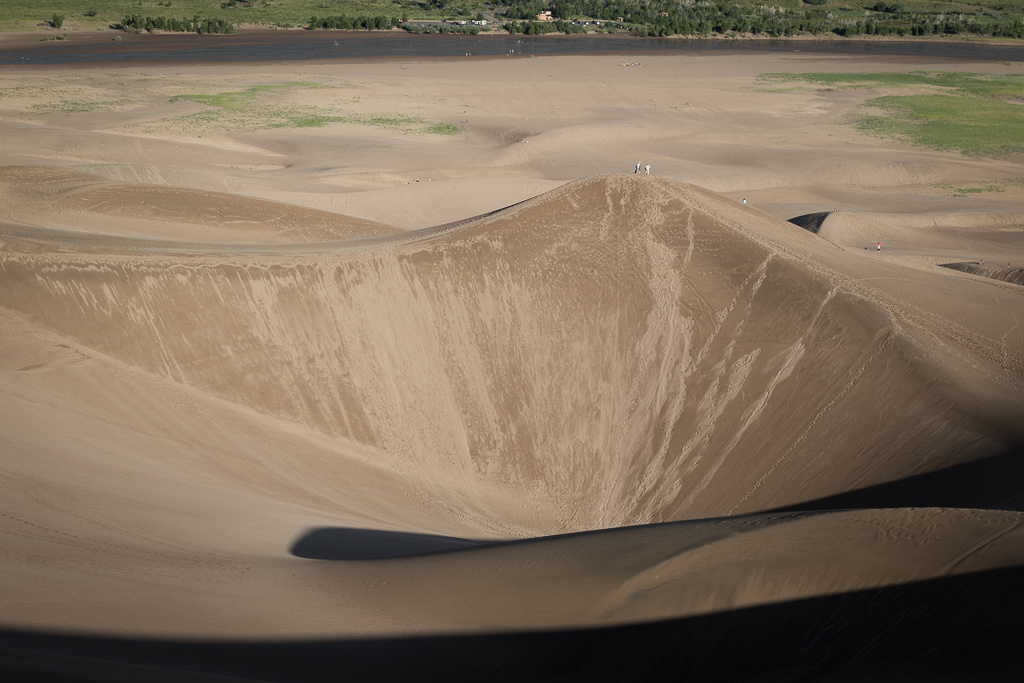 The storm was coming in; it was around 3pm; Kathleen and Madeline didn’t want to spend the evening hiking so we started back to the motel.

Fortunately, I had a slip of paper from the motel giving a list of places to eat dinner with phone numbers. As we drove back, I called ahead and ordered dinners to go so K & M would have something to eat later (me too). I dumped them… oops dropped them off at the motel, turned around immediately and headed back in the rain to the parking lot at the Great Sand Dunes. Fortunately, the rain stopped by the time I got there at 5PM and the sand had cooled down. I normally don’t take backpacks but this time I did, including a fleece and jacket. Didn’t need them then but thought I might later. Good thing I did. I carried my shoes and walked barefoot as I crossed the shallow stream and started up. The sand felt exquisite under my feet as I walked.

I was headed for the High Dune, but not to the top of it. I wanted to go beyond it. There were no official trails. You could walk anywhere since one night of wind would clear away any sign of human travel. It was hard walking, uphill on sometimes steep slopes in sand. And sometimes you had to go down a slope to go up another dune.In some spots, I’d go 10-15 feet and have to stop to catch my breath. I later found out that I have aerobic-induced asthma and now have an inhaler to stop getting out of breath.  About three-quarters of the way up, I put on my boots. Eventually I passed the High Dune, the highest point.

But there were other dunes that looked almost as high. I kept hiking beyond it until I got to a point where the dunes and light were in the right direction. ONe additional benefit was the sight of a fourteener (a mountain over 14,000 feet high) in the background.

I kept going a bit further until I was able to get a clear line of sight to dunes where sunset would occur.

After sunset, there was still some light in the sky so I kept taking pictures.

I finally started back. By then it was getting darker. There was no moon this night. Some of the dune edges I had to walk along had a good drop on one side with a 100′ drop on the other. Unfortunately, my flashlight failed almost immediately. Fortunately I had a head lamp that I bought just before the trip. It worked like a champ. I posted a glowing review on Amazon afterwards. I tried to follow my footsteps back which worked part of the way until I lost them. There were other footprints from others but they went in various directions. I could tell the direction I wanted to go to more or less and kept hiking. Eventually I reached and crossed the stream but wasn’t sure where the parking lot was from me. Just for the heck of it, I pulled out my iPhone. I had reception! Zooming in on Google Maps (which has helped me so many times when traveling), I saw something a little to the south that could only be the parking lot. Sure enough, a short hike brought me there around 10:30PM.

I still wanted to take some night sky pictures so I switched to an f2.8 lens brought just for that purpose and went back out by the stream. It was an educational experience. My headlamp paid dividends again.

My favorite shot was this one: 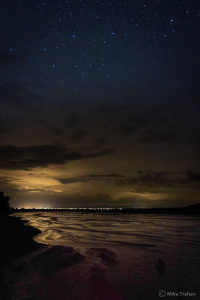 Finally I headed back around midnight, the last car in the parking lot.

The next morning after checking out, we all headed to Zapata Falls which was on the way to the Dunes along the side of the mountain range running at right angles to the Dunes themselves.

We took a short half mile rocky trail up to the falls area.

Madeline and Kathleen at Zapata Falls with the Great Sand Dunes

Once by the falls, Kathleen stayed back while Madeline and I walked upstream and around a canyon bend to Zapata Falls itself. I had my Teva sandals on but Madeline had to go barefoot over the rocks. The water was ice cold which helped numb the pain for her :)

On the way back to the car, Kathleen slipped on a rock and fell. Fortunately she was uninjured. When she fell in NJ in February, she broke her arm. I handed my camera to Madeline so I could hold her arm the rest of the way. Then Madeline fell! It was a rocky road. I was so proud of her. As she’s laying on the ground, Madeline looked up deeply concerned asking about whether she had damaged the camera. Excellent sense of priorities that girl. Madeline and the camera were fine. We all continued down and left on the next leg of our trip having had a fine time.